Nathalie Procikevic, real estate broker affiliated with groupe sutton – performer, is very attached to her roots and is involved as much as she can for the Ukrainian community here and in Europe.

Over $14,000 already raised during fundraisers for the benefit of the Canada-Ukraine Foundation

A week after the shock of the announcement of the invasion of Ukraine by Russia last February, Nathalie got busy organizing a fundraiser for the Canada-Ukraine Foundation.

She wanted to organize an event where anyone who wants to can show their support and donate to the cause.

Quickly, a location and musicians were found thanks to her network and several people responded to the call for prizes for the silent auction (donation, among other things, for a weekend in a chalet in Saint-Côme, a painting, gift-certificates, etc.).

During the event, the participants were already asking her when the next one would take place. Her first reaction was that she wished another fundraiser wasn't necessary. “I didn't want to think about organizing another event, I just wanted this war to end.” she confided.

Unfortunately, the months passed and seeing that the war was not ending, Nathalie organized a second fundraiser in May.

This event grew more than the first thanks to word of mouth. More than a hundred items were offered as prizes for the auction. The Montreal Museum and Art Center generously lent her its premises to hold the event and exhibit the many prizes. She organized the posting of all the prizes online in order to make the auction virtual to attract the greatest number of participants. 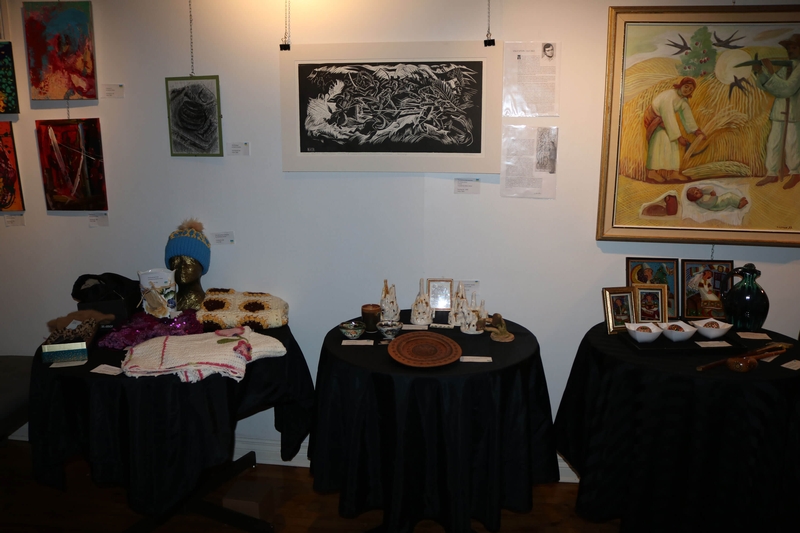 The two fundraisers raised more than $14,000 for the Canada-Ukraine Foundation. If Nathalie chose this foundation, it is because each donation given has a direct impact in Ukraine by providing rapid and effective humanitarian aid to those who need it in Ukraine to face any new aggression from Russia.

Participation in the Ukrainian Festival of Montreal

After a well-deserved summer break following the organization of these events in addition to the workload of real estate broker, Nathalie participated in the Ukrainian Festival of Montreal in September. During this event, on her booth, she organized a 50/50 kitty which was won by a newcomer from Ukraine and the other half of which was donated to the Ukrainian Canadian Congress (UCC).

The 2022 edition of the Festival had the largest number of participants in its history, after the arrival of many newcomers from Ukraine to Montreal, as well as the participation of many Montrealers wanting to show their support.

Nathalie has been attending the Malanka (Ukrainian New Year's Ball) for many years and this is the first year she will be one of the sponsors. The ball will take place on January 28 at the Challenger reception hall in Ville Saint-Laurent and, like every year, a Ukrainian music group will play on stage.

Nathalie has been a member of SUM since childhood and has herself participated in summer camps and remains involved today.

These organizations are present all over the world and offer activities and summer camps for young people of Ukrainian origin to learn more about their culture, language and traditions.

This year, the organizations offered a free spot at camps for young newcomers from Ukraine to give them a break from weeks of turmoil before arriving in Canada. “We could see that it did them a world of good, especially to be in a place where people understood their language.” says Natalie. The camps allowed them to forget about the war for a moment and discover the beauty and tranquility of Quebec's nature.

Committed to new arrivals from Ukraine

Thanks to her work as a real estate broker, Nathalie also helps families arriving from Ukraine to find housing and furnish it. Contact with someone who speaks their language and who understands their situation facilitates the often difficult transition. She also created, with the help of a translator, a three-page document in Ukrainian on how to find your first home in Montreal. She was also interviewed on the subject by the “UkrainianWave” program broadcast on ICI TV. You can find the video here.

It is not only by sending money to Ukraine that you can help, but also by giving a helping hand to newcomers here.

“All this year [2022], despite being a real estate broker, continuing to manage my clients, there is always that in the background, this desire to do something more.” Even from a distance, she helps as she can, “a small drop in the ocean that makes a difference” she says.

Nathalie is therefore appealing for everyone's support in order to facilitate the transition of new Ukrainian arrivals. Everything can make a difference: contacts for a job or housing, material donations such as appliances, furniture, dishes, etc. As she says, even decorations make the difference in making the place warmer. Click here to contact her.

A “Gofundme” campaign is still active to collect donations for the Canada-Ukraine Foundation. You can access it by clicking here.